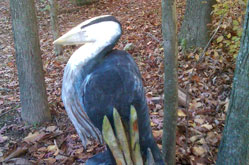 As a child in the 1930’s, Bob Johnson reminisced on his Boy Scout memories of camping in the area known as River Bend. He recalled the land being poor for agriculture but adventurous and fascinating to the local children. Playing along the Root River, swimming and fishing came naturally, and it seemed as though the beautiful vacant land hoped for utilization.

In 1957, the YWCA of Racine wished to expand its programs beyond the confinement of the building downtown, with an emphasis on understanding and enjoying the outdoors.

In 1959, J. Lester Johnson purchased the first 30.8 acres of River Bend for $27,500. The money came from equal donations made by Western Publishing, the Johnson Foundation, and Walker Manufacturing. This area was previously used as a Girl Scout camp and YMCA day camp.

In 1962, five additional acres were purchased, giving better access to North Green Bay Road. This area is now the building and visitor’s parking lot. Then in 1963, the picnic shelter/pavilion was constructed with a donation from the John Hammes Foundation.

Up until 1972, day camping at River Bend was the primary use of the property. This program was called “Day Camp at Squaw Point” but later changed to “Camp Arrowhead”. During this time of change, a fund-raising campaign was started to build a nature center/meeting facility. This new facility would emphasize nature and recreation for the general public. So, 20.5 more acres were purchased from the Beres family that included part of the 26 acres previously owned by the Hesline family. The purchase included the upper field, Gravel Pond, and mixed hardwood forest where we tap maple trees.

During 1975, the 4,700 square foot building was constructed, and the final 27.1 acres of the area was donated by Johnson Wax. This donation included the upper river trail, duckweed pond, and large field to the south of the entrance driveway. Thus, the final touches to the River Bend Nature Center stood tall.

River Bend Nature Center and its Programs
From its very inception, environmental education was the key component to all River Bend programs. In the 1980’s wildlife rehabilitation work was taking place at River Bend. The kitchen was filled with numerous cages of wild animals. Michigan State University and UW-Stevens Point intern naturalists lived at the building during their internships. By the 1990’s, it had been decided that River Bend was not properly equipped to handle wildlife rehabilitation and environmental education, so the wildlife rehab program was stopped in 1989.

In the spring of 1991, a new environmental education program came to River Bend, and that program was known as the Earthkeepers program. Earthkeepers was started with the help of a grant from the Racine Junior League. Since then, River Bend Nature Center has been known for its wide variety of naturalistic programs. It is not uncommon to hear college students today tell us about when they were in an Earthkeepers or other program here at River Bend. Over the years, River Bend has served as many as 10,000 school children in a single year.

Around 2004, the SWIM’R program was developed. SWIM’R stands for Safe Water Is My Responsibility and focuses on issues surrounding water runoff into the Root River and thereby, Lake Michigan. That program was transferred in 2007 to the new REC center in downtown Racine in partnership with UW Parkside.

In 2007, the new EM’s cabin was completed with the support of the SE Wisconsin community in the ongoing, “Invest in a Natural Asset” program. EM’s cabin provides an even great experience to area students.

What will tomorrow bring? We look to go where Nature leads us, developing a better understanding of how we can best co-exist with all of nature, the land, the water, the air, the plants and wildlife and always making sure our connections to the Earth are restored and maintained.